Let us start with a simple experiment by rolling a normal six-faced dice on a completely flat ground.

The outcome can be one, two, three, four, five (like in the picture), or six. If we roll the dice, one of these six outcomes always appears, i.e. every result of the dice roll can be found in the list. And each one of these outcomes excludes the others, e. g., if we roll a five, we could not get in the same time two or six or any other of the listed outcomes (we have only one dice and it shows five). Outcomes of an experiment/process with random results having such properties are called elementary events. Thus, for a normal six-faced dice roll, one, two, three, four, five, and six are elementary events.

Note, that one and the same experiment/process can have many different sets of elementary events depending on what is wanted to measure. For example, let us have two deserts: desert 1 and desert 2. And we are not able to choose which one to eat, however, one must be chosen. If we happened to have the same six-faced dice, and we want to use it for choosing between the deserts, we may define elementary events of the dice roll just odd (meaning dessert 1) and even (meaning dessert 2). These are also elementary event of a six-faced dice roll, since with every roll one of these two outcomes always appears. And the outcome of the roll can be in the same time either odd or even, i.e., the outcomes exclude each other.

What is $\Omega$ in the case of

Bring some examples of events concerning:

In the beginning of an experiment/process with random outcomes, we do not know what will be the result. However, we can describe the result by listing all the elementary events (if there is finite set of them) and assigning to every elementary event a probability.

A probability is a numerical indicator between $0$ and $1$ showing how likely an event is to happen.

For any experiment/process with random outcomes,

the sum of probabilities of all the elementary events is always $1$.

This property can be used for calculating probability of some event. For example, the table below shows the probabilities of the states of machines in a factory, and we want to know what is the missing probability.

What is the probability that exploit fails? 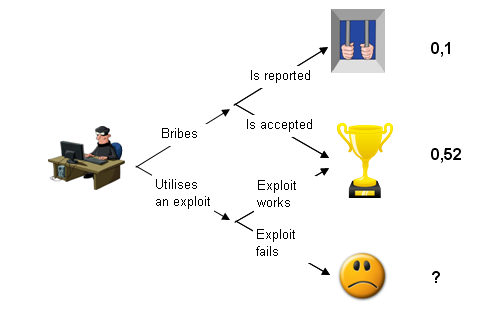 Now, let us find the probabilities of the elementary events of our dice roll. Let's start by simply rolling the dice and counting how many times we obtain each elementary event.

If the number of elementary events is finite and they are equally likely (i.e. with equal probabilities), then the probability of an event $A$ is

It is called the formula of classical probability.

Assign probabilities to the following events:

In order to understand fully the assumption “elementary events are equally likely” in the formula of classical probability, let us replace the six on the dice with another five ($\Omega=\{1,2,3,4,5\}$). Then common sense tells us that $5$ should occur two times more often then other outcomes (the dice has two fives and all the other outcomes just one time). Thus, all the elementary events are not equally likely. If we still try to use the formula of classical probability we obtain $\text{Pr}[\text{"we roll a five"}]=\frac{1}{5}$. However, the correct probability distribution for such a dice is

The result is obtained by noticing that the dice has 6 different sides which are equally likely. Thus, the event $\text{"we roll a five"}$ means two sides out of six.

Bob has $5$ working video cards and $2$ non working one on his shelf. He does not know which are which, so he asks 3 friend (in order to be sure), what is the probability of getting a non working one by just taking one form the shelf? A classmate has agreed to buy a working one and Bob wants to put minimum amount of effort into the deal.

Which of Bob's friends is correct? What mistakes make the ones who are not correct?

What is the probability of choosing randomly the letter “O” from the following words: