The big Oh notation considered in the previous lesson is the most widely used asymptotic notation in computer science. The reason is that when designing a software system, we want to be sure that the algorithms we choose will be fast enough to solve our problems at the required input sizes, so we need to know some upper bound on how fast the program's running time $T(n)$ will grow as input size $n$ increases — and if we manage to prove that $T \in O(f)$, where $f$ is some function which doesn't grow too fast, then this is the kind of upper bound we need, since $T \in O(f)$ means that our algorithm's running time $T$ is guaranteed to grow no more rapidly than $f$ (for large inputs and up to a constant).

However, sometimes we are interested in the lower bound of an algorithm's running time, i. e. we would like to express the statement that the running time $T$ grows no less rapidly than some function $g$. An example is an encryption scheme: to feel safe when our documents are encrypted, we want to have some guarantee that a hacker, not knowing the password, will spend on average at least time of the order of magnitude $g(n)$ to break the encryption by brute-force attack, where $n$ is the length of the password and $g$ is some function (one can say that an encryption scheme is good if one can prove this for a function $g$ which grows rather fast). This calls for another asymptotic notation: the Big Omega. 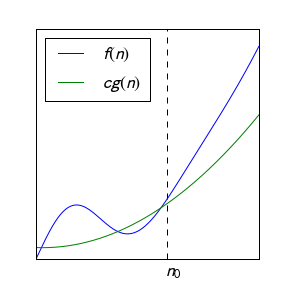 Analogously to Big Oh, for determining whether $f \in \Omega(g)$ it is often useful to consider the ratio of the functions. Namely, the following criterion holds.

Which of the statements in the exercises for big Oh are true if we replace $O$ by $\Omega$?

Alice tells Bob: I developed a new sorting algorithm with running time $\Omega(\sqrt n)$. Bob is not impressed. Why?

Unlike the Big Oh, the Big Omega is a lower bound. For example, if the running time of the algorithm is $T(n) = n^2$ or $T(n) = n^{100}$ or anything larger then $T(n) \in \Omega(\sqrt n)$. So Alice's statement only gives a guarantee on how much time her algorithm spends at least. This is no big deal since it is easy to create an algorithm that spends at least a given amount of time (e. g. simply put a sleep function call at the end).

1) The argument is actually very simple: Each comparison gives at most one bit of information. There are $n!$ possible permutations of the list. To identify which of the permutations needs to be applied, we thus need $\log n!$ bits, hence $\log n!$ comparisons.
asymptotics/03_big_omega.txt · Last modified: 2014/01/20 11:09 by marje