6. The negligible, the noticeable and the overwhelming

In this lesson we will meet three concepts related to the asymptotic notions that are especially often used in cryptography: the concepts of negligible, overwhelming and noticeable functions. This lesson assumes some basic knowledge of the concept of probability, as covered by lesson 2. Probability of two events in the Probability theory topic.

Is this a good idea or is an unreasonably large number of calls needed to get a failure probability as small as desired? For concreteness, let $p = \frac12$. Then $q^k = 2^{-k}$. To achieve the very small failure probability $2^{-90}$, we only have to call the algorithm $A$ for $90$ times, which is not very much. For different $p$, the results are similar. So $A^*$ has rather good performance; this is actually the basic idea used for generating RSA keys in practice.

Now suppose we have another algorithm — algorithm $B$ — which accepts some input parameter $k$, runs in time proportional to $k$ (i. e. in time $ck$ for some constant $c$) and fails with probability $P_{\text{fail}}^B(k) = \frac1k$. If we cannot make algorithm $B$ succeed with a higher probability by running it multiple times, like we did for $A$ (because $B$ is not probabilistic or because it doesn't tell whether it failed), the only way to decrease its probability of failure is to increase the parameter $k$. However, to achieve failure probability $2^{-90}$, we would have to make $k = 2^{90}$ — giving a running time vastly longer than anybody could wait even if, in the running time estimate $ck$, the constant $c$ were equal to only 1 CPU cycle).

So, decreasing the failure probability of algorithm $B$ is much harder than that of $A^*$ because the function $\frac1k$ decreases much slower than the function $2^{-k}$. 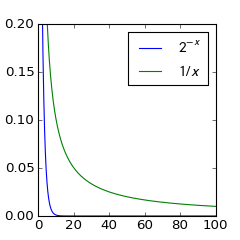 As before, we use the gap between polynomials and the exponential function as a clear cut-off point. The algorithm $A^*$ is good because its failure probability $P_{\text{fail}}^{A^*}(k)$ approaches zero faster than reciprocal of any polynomial. This leads to the following definition of negligible probabilities.

We can restate the definition in alternative form.

Necessity follows directly from the definition of Big Oh.

In other words, a positive function is negligible if and only if it grows asymptotically no faster than the reciprocal of any positive polynomial.

Yet another equivalent condition is given by the following lemma.

Lemma. A positive function $\mu(n)$ is negligible if and only if for any positive polynomial $p(n)$ the product $p(n)\mu(n)$ converges to zero.

Actually, as the following lemma says, to prove that a function is negligible, it suffices to consider only monomials $n^{i}$ instead of all polynomials $p(n)$.

Lemma. A positive function $\mu(n)$ is negligible if and only if for any natural number $i$ the product $n^i\mu(n)$ converges to zero.

In crypto, we consider probabilities that are negligible to be too small to matter. In other words, if an attack works only with negligible probability, then we consider that attack to be unsuccessful.

Of course, it is somewhat arbitrary to say that negligible functions are too small to matter, while, e.g., $n^{-80}$ (which is very very small) is considered to matter. The reasons for using this particular class of functions in crypto is that it behaves quite nicely under various operations, this makes things easier in many situations. The following lemma lists some of these nice properties of negligible functions:

Lemma (Some properties of negligible functions).

Show that the probability that the adversary wins is negligible.

Note that here the problem statement was somewhat ambiguous (but hopefully it made you think a little). If we had not made the assumption that the number of times the attacker can guess is bounded by some constant but would have allowed it to grow to infinity as the parameter $x$ is increased (e. g. suppose that $x$ represents time and although standards with longer key lengths are adopted over time, the attacker has an exponentially growing botnet at his disposal), then the winning probability would not necessarily have remained negligible at all. E. g. if $p' = 2^{-x}$ and $c = 2^x$, then the product $cp' = 1$ is not negligible any more, so the reasoning above is not valid (the success probability of guessing the key $k'$ is of course less than $cp' = 1$, but it can be shown to converge to $1 - \frac1{e} \approx 0.63$, so it is actually indeed not negligible). If you reached that conclusion, you were right, too.

The next important class of functions in cryptography is that of overwhelming functions. Intuitively, a probability is overwhelming, if it is almost $1$. Formally:

A function $f$ is overwhelming if $1-f$ is negligible.

In a good cryptosystem, which of the following is overwhelming?

Let us remind the algorithms $A$ and $A^*$ we discussed when introducing the notion of negligibility. We analyzed how the failure probability of algorithm $A^*$ is related to its running time (which is proportional to the number of repetitions). But algorithm $A$ might also have some input parameter (e. g. the length of the prime number to be generated); let's call it $n$. We didn't consider how $n$ affects the running time of $A^*$ — which is fine if we are only interested in a particular value of $n$. But let's investigate now how the performance of $A^*$ scales when $n$ is increased (e. g., if we want to generate longer and longer RSA keys).

As we saw before, thanks to the fact that $P_{\text{fail}}^{A^*}(k,n)$ is negligible in $k$, i. e. decreases very fast when $k$ increases, the running time $T_{A^*}(n)$ grows slowly if we decrease $\epsilon$. However, that analysis didn't cover how $T_{A^*}(n)$ behaves with respect to $n$; this behavior may be not as good. If the success probability of algorithm A, $p(n) = 1-q(n)$, decreases very quickly with $n$, then the number of repetitions must also grow very quickly, so that algorithm $A^*$ may get very slow for large $n$, even if the time complexity of algorithm $A$ is small.

To be sure that the number of repetitions needed doesn't grow too fast with $n$, we need a lower bound on the probability $p(n)$ that would guarantee that $p(n)$ does not decrease too fast. This is in contrast with the concept of neglibility, which gave an upper bound on the failure probability $P_{\text{fail}}^{A^*}(k)$, guaranteeing that it converges to $0$ sufficiently fast. So we need a new asymptotic notion: if the function $p(n)$ doesn't get near $0$ too fast, it is called noticeable. The precise definition of noticeable is given below.

Let $f$ be a positive function $f$. The following are equivalent:

The function $f$ is neither negligible nor overwhelming nor noticeable.

Finally, to show that the function $f$ is not noticeable, let's suppose the contrary and show that this will lead to a contradiction. If $f$ were noticeable then $n^i f(n) \to \infty$ for some $i \in \mathbb N$. In particular, then we would have $\lim_{n \to \infty} n^i 2^{-n} = \infty$, where the limit is taken over all odd natural numbers $n$. But this is false since it is a well known fact that $\lim_{n \to \infty} n^i 2^{-n} = 0$ for any $i$ (the latter limit holds even if we do not constrain $n$ to be an odd natural number but take the limit over all real numbers).