1. The need for asymptotic notation: a case study

Consider the following problem. In Python, the numerical computation library numpy provides numpy arrays — a memory- and CPU-efficient alternative to ordinary Python lists. Numpy arrays have one problem, however: unlike Python lists, they cannot be resized (akin to arrays in many other languages like Java and C). Your program is provided with a long list of integers coming from a file, one integer per line. You don't know the number of lines beforehand. You want to make a function to efficiently read the data into a numpy array. How would you do it?1)

The simplest solution would be reading the data into an ordinary Python list and then converting the list into a numpy array; however, with big inputs that would make the program consume multiple times more memory than the constructed array, as Python lists are rather inefficient. Another idea would be to read the file twice — count the number of lines on the first reading, then create the array of appropriate size and fill the array on the second reading; however, we would like our function to work also in case the input file cannot be scrolled back (e. g. if the file is actually the standard input stream). So let's try to find a solution that doesn't use Python lists and reads the file only once.

Here's a first try: we grow the array one element at a time — after reading a line from standard input, we create a new array which contains one more element than the old one, copy the contents of the old array into the new one and put the integer we just read at the last position of the array.

The function readNumbers1 solves the problem correctly. But what can one tell about its performance? Will it be fast enough if the file contains many numbers? 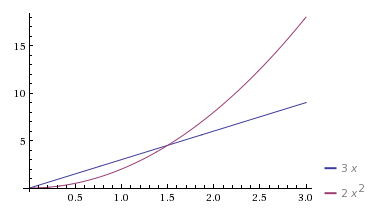 Figure (parabola and line). For any positive constants $a$ and $b$, the function $ax^2$ will eventually become (much) larger than $bx$. Geometrically: given an upwards-oriented parabola through the origin and any rising straight line through the origin, the parabola will meet the line at some point to the right of the origin.

Real running times of this program with the python 2.7 interpreter on an Intel Core i3 380 processor are like this: 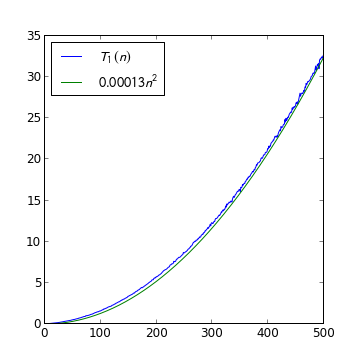 The times indeed grow quadratically, as expected: if n grows $10$ times then the running time of the algorithm grows approximately $10^2 = 100$ times. For $n = 10,000$ the function already takes multiple seconds to run. From the last two rows of table it appears that for large inputs, the running time of the algorithm is $T_1(n) \approx 1.3 \cdot 10^{-4} n^2$ milliseconds. This can also be seen from Figure (running times of readNumbers1).

Can we do better? Noting that the quadratic part in the time of readNumbers came from resizing the array, let's try to reduce the number of resizings:

Unlike readNumbers1, readNumbers2 does not increase the array size by $1$ but doubles it. Therefore creation of a new array and copying of the contents of the old array into the new one is needed more rarely, at the cost of some memory being wasted on unused positions at the end of the array. The difference between the two algorithms is illustrated by the drawing below. 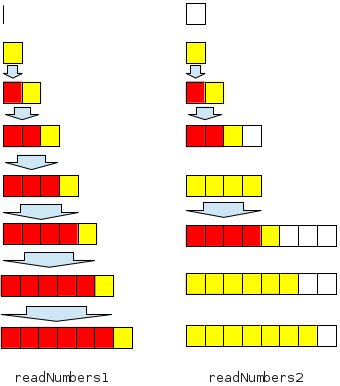 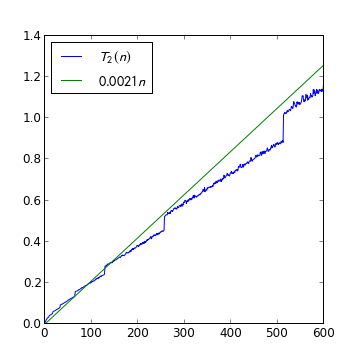 Looking at the rows $n=10000, 100000, 10000000$ in the table, it seems that the running time is proportional to $n$, being approximately equal to $0.0018n$. Looking at the graph, one sees that $T_2(n)$ actually oscillates between two linear functions, with jumps at numbers of the form $n=2^p+1$ — points where the array is resized. We see that although $T_2(n)$ is not exactly proportional to $n$ itself, for large $n$, there is indeed an upper bound to the running time of this function which is proportional to $n$, just as our theoretical analysis predicted — namely it seems from the data that for sufficiently large $n$, $T_2(n) < 0.0021n$. Thanks to this fact, readNumbers2 has running time growing more slowly than that of readNumbers1 (which had quadratic time) and can even be used in case of millions of elements. Even if the constants $c$ and $d$ in the estimates $T_1(n) \approx \frac{c}2n^2$ and $T_2(n) < dn$ of the two algorithms were different, the second one would still beat the first one for large enough $n$ (remember Figure (parabola and line)!). For example, if the first program were run on a fast computer and the second on an old slow one, the first one would probably be better than the second on small inputs, but inevitably the second one would finish faster for large enough inputs. Changing the constants does not change much the order of magnitude of the inputs, for which the algorithms can be used, either: even if the constant $c$ were a hundred times smaller than we measured in the benchmark, the first algorithm still would still take a long time to handle a million elements ($1.3 \cdot 10^{-4}/100 \cdot (10^6)^2$ milliseconds = 1300 seconds ≈ 22 minutes) — something which the second algorithm accomplishes in less than two seconds.

Our conclusions from these two examples are:

These observations lead us to the next lessons, where we will define asymptotic notations: the Big Oh and the Big Omega.

As an aside: in real life, to solve the problem of reading a text file of integers, one would use an appropriate function in numpy like numpy.fromfile; such functions use the same idea as we implemented in readNumbers2. The same idea is also used by Python lists (a Python list uses an underlying array, which has some spare elements at the end, so that the time of adding $n$ elements one-by-one to a list by calling list.add is linear, not quadratic in $n$).