In this lesson we will introduce our first asymptotic notation: the Big Oh, which can be used for expressing an upper bound for an algorithm's running time.

In the previous lesson 1. The need for asymptotic notation: a case study we proved theoretically that for sufficiently large $n$, the running time of the second algorithm satisfies $T_2(n) < dn$ where $d$ is some constant. Here is the figure of measured running times again: 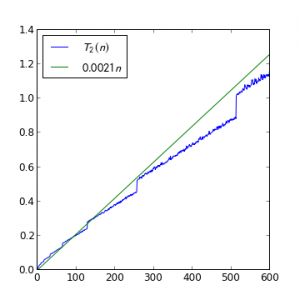 As said in the previous lesson, the figure confirms that we didn't make a mistake when calculating the theoretical upper bound: for example, from the figure one sees that $T_2(n) < 0.0021n$ if $n > 150$.

Why bother with theoretical analysis at all if one can measure running times in practice? Well, sometimes we want to have a rough estimate on the running time to decide whether to implement an algorithm at all; estimating worst-case running time (as opposed to average running time) based on measurements only is also not reliable (there could be some possible inputs taking a very long time but it might happen that we don't hit any of them in our benchmark). It can be quite hard to theoretically make claims with explicitly computed constants like “$T_2(n) < 0.0021n$ if $n > 150$”, but it is much easier to prove weaker statements like “for sufficiently large $n$, $T_2(n) < dn$ where $d$ is some constant”, which still give a rough idea. In computer science, such weaker statements are used so often that a shorter way for writing them has been invented: instead of “for sufficiently large $n$, $T_2(n) < dn$ where $d$ is some constant”, one writes \[T_2 \in O(n).\] This is what is called the Big Oh notation.

Before going to the general definition of Big Oh, let us note that in this and the following lessons, we will only talk about positive functions, i. e. functions whose values are positive real numbers. This is in order to simplify our definitions and properties of asymptotic notations a little. We will also assume that the function arguments are natural numbers. We will not demand the function to be defined and positive on all natural numbers, but only starting from some point (like $\log n$, which is defined and positive for $n \geq 2$). The function we are interested in will usually be the running time or memory consumption of an algorithm for given input size, which obviously satisfies these requirements (its value, i. e. running time or memory usage, is a positive real number, and the argument, i. e. the input size, is a natural number). 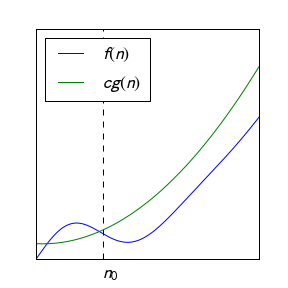 If $f(n)$ is the running time of an algorithm for input size $n$, then this is usually indeed the most important information one needs about the algorithm's performance:

The Big Oh is the oldest in a family of mathematical notations, called asymptotic notations, which can be used to express how a function behaves when its argument grows to infinity. The Big Oh was taken into use by mathematician Paul Bachmann in the end of the 19th century, but is sometimes called the Landau symbol for another mathematician, Edmund Landau, who soon adopted it (the name Landau symbol is actually also used for a related asymptotic notation, the little oh; the latter was indeed introduced by Landau). For analyzing the performance of algorithms, the Big Oh has been popularized by the great computer scientist Donald Knuth, who also invented some other asymptotic notations (like the Big Omega, which we will meet later). Following Knuth, the Big Oh should actually be called the Big Omicron (a Greek letter that looks like the Latin O) — but most people still use Oh since this is easier to say and type.

Given two functions $f$ and $g$, how to determine whether $f \in O(g)$ or not? We have already done it, using straightforwardly the definition of Big Oh, for some pairs of functions (we proved that $T_2 \in O(n)$ and some more such statements in the exercises), but actually there is a general approach which turns out very useful: this is to look at how their ratio $\frac{f(n)}{g(n)}$ behaves. Indeed, $f \in O(g)$ means that there exists some $c$ such that $f(n) \leq cg(n)$ for sufficiently large $n$; dividing this inequality by $g(n)$ (and recalling that we assume $g(n) > 0$), we get an equivalent inequality $\frac{f(n)}{g(n)} \leq c$. So we get the following criterion: 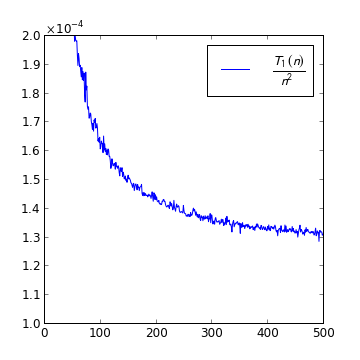 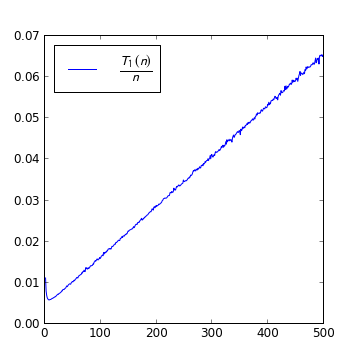 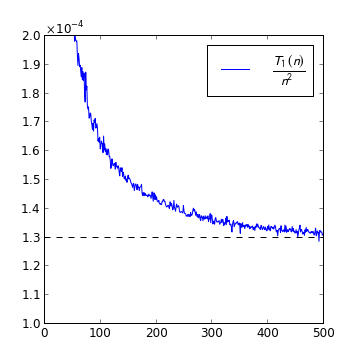 So we found the following general criterion for determining whether $f \in O(g)$.

In some nasty cases, Criterion 2 cannot be applied since the limit does not exist. It turns out that an example is our function readNumbers2: 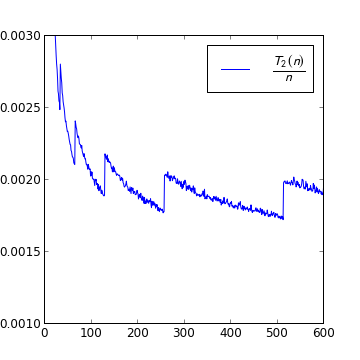 For most functions one encounters, however, the limit $\frac{f(n)}{g(n)}$ exists and Criterion 2 is useful.

Lemma (Some properties of big Oh).

The following exercise demonstrates the power of asymptotic notation: using Big Oh estimates, one can get some idea about an algorithm's performance even if the exact expression for the running time is too difficult to calculate. (Of course, for some applications we might need the precise number of steps — in such cases, we cannot use asymptotic notation. But otherwise, asymptotics make life easier.)

Assume that you are analyzing the running time of an algorithm. Your analysis reveals:

Find a Big-Oh upper bound of the running time of the main program. More precisely, find a constant $d$ such that the program's running time is in $O(n^d)$; try to find the constant $d$ as small as possible. To justify your answer, use the properties stated in Lemma (Some properties of big Oh).

Remark. Let us note that an exact expression of the running time (instead of the asymptotic upper bound $O(n^{15})$) would be much more difficult to calculate. After some calculations, we would find the algorithm's running time to be at most $\sum_{a=0}^{a_0-1} \mathit{time}(f(a))+\sum_{a=a_0}^{n^3} 2ka^4 + n^5e$, where $e$ is an upper bound for the running time of an elementary operation. This is a rather complex summation formula with various parameters ($e$ and $m$) that depend on the specific machine and implementation details and with the annoying $\sum_{a=0}^{a_0-1} \mathit{time}(f(a))$ that is only relevant for small $a$'s anyway. Although such a detailed analysis may be required in some cases, in many cases we would be happy with an estimate that shows the essential complexity of the algorithm, without getting into too many details of the formula. This is possible using asymptotic notation.